The first Council will address the question of community:

Our Council methods are based on ancient practices and the Way of Council developed at the Ojai Foundation.

The first Council will address the question of community:

Our Council methods are based on ancient practices and the Way of Council developed at the Ojai Foundation.

This moving and humorous award winning documentary follows six teenagers who, like the “average American child,” spend five to fifteen hours a day behind screens. PLAY AGAIN unplugs these teens and takes them on their first wilderness adventure – no electricity, no cell phone coverage, no virtual reality.

Sponsored by Sustainable Fairfax, Roots to Branches and Fairfax Volunteers.

This moving and humorous award winning documentary follows six teenagers who, like the “average American child,” spend five to fifteen hours a day behind screens. PLAY AGAIN unplugs these teens and takes them on their first wilderness adventure – no electricity, no cell phone coverage, no virtual reality.

Sponsored by Sustainable Fairfax, Roots to Branches and Fairfax Volunteers. 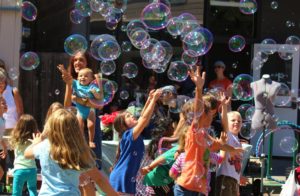 Sustainable Fairfax celebrated another successful “Streets for People” on the afternoon of Sunday, August 25. Hundreds from our community came out to enjoy our public commons without vehicle traffic between Broadway and Elsie Lane on Bolinas Road. The street closure created an entirely different atmosphere, where children and adults alike could play and socialize safely in the street.

Many have commented that it felt like a Mexican or European piazza. One woman’s response when asked about her favorite part of the event was “The people!” And that is the driving force behind the open streets movement- providing an opportunity for community members of all ages and backgrounds to connect and be together in vibrant public spaces, and inspiring people to creatively construct those spaces.

A dedication of the Mountain Bike Mosaic near Mono parking lot kicked off the event. The Youth Music Showcase, put together by Jack Irving, was a big hit throughout the day, featuring exceptionally talented local youth bands and singers. Another highlight was hula hoop instruction to adults and kids provided by Josephine Stoddard of Jellyflow Arts. And, the little ones got a kick out of the Strider Adventure Zone run by Krakatoa Bikes. The Roco dancers put on several performances that wooed the crowd and Sol Studios brought yoga and movement to the street. Iron Springs Pubcollected donations for the Marin Humane Society by selling their artisan rootbeer. Jen Jones, Jenna Chandler and others painted a beautiful street mandala. Hairfax and Jenn Hair Artist gave free haircut services. And, Roots to Branches inspired youth to help create the zero waste kiosks for the event.

This event was founded last year by Renee Goddard of Sustainable Fairfax (now also on the Town council) in collaboration with The Town of Fairfax, the Fairfax Chamber of Commerce, and the Fairbuck. Renee was deeply inspired by Ciclovia, a successful car-free program in Colombia that closes 70 miles of roadway every Sunday, allowing two million participants to enjoy the open streets. “The diversity of people in a common space makes for a rich fabric in which each citizen is a thread,” said Goddard.

This year Jennifer Hammond of Sustainable Fairfax led a committee to plan and organize the event, and The Fairfax Chamber and the Fairbuck provided funding. Due to the extraordinary volunteer efforts, the entire event was run on a $1,000 budget. The Fairfax Police and Fire departments provided strong support and assistance in the planning stages and at the event.

Sustainable Fairfax passionately believes in the community building benefits of open streets events and looks forward to many more in the future. To stay on top of future events, like the Streets for People Facebook Page.

Jean-Jacques spent six weeks in Fairfax – which he calls aBohemian town – and sought to learn as much as possible about our greenmovement here and in the rest of Marin.  In terms of a sense ofcommunity, of course he thought our town was the most thriving and authentic – MillValley didn’t have the same local feel.

He admired our Sustainability Center and Backyard – ourlending library, information on Water and other sustainability subjects, ourdisplays, and our wonderful garden with its rainwater harvestingsystem.  He was impressed with the classes that we do on composting,toxins and seed harvesting, etc.  While he visited with one of ourboard members at the Center, his children played at our crafts table and madenecklaces out of recycled glass beads and materials.

This summer, we had a special guest –

Garbage is collected every day!

In Paris, according to an article in TheGlobeandMail.com,“Most live in 19th-century apartment buildings that often share space with stores and restaurants, but were built without extra room to store garbage. Asa result, the city is forced to collect waste every day.”  The article says that the city hopes to sell its project based on the notion that composting in the courtyard can improve relations between notoriously aloof Parisian neighbours just as much as it can help the environment.

His main take on Fairfax — and inevitably America, because if you only visit one area, it becomes America – was that we have the technologies in Fairfax but our behavior hasn’t changed.  “Where are all the bicycles?  There should be more people riding bicycles,” he says. Henotes that we do have a lot of recreational biking. He asked why it is such a good thing that we have green waste and kitchen waste picked up by a big gasguzzling truck vs. composting in our own yards.  However he was impressed with our new green energy program and our sense of community, the friendliness.  He left Fairfax with 10 Eco-friendly stickers from the Center stuck on his car.

He spent his last day in Marin taking his kids with him on a visit to the RecyclingPlant at Marin Sanitary Services – isn’t that the way you’d spend your family vacation?  Leave it to Sustainable Fairfax to set up such a great outing for him.

For more information, here’s the link for an article in English about Jean-Jacques Fasquez’s ‘Compost Master’ job in Paris.

Also, here is a video about his program.  Even if you don’t understand French, you’ll get the story in pictures.