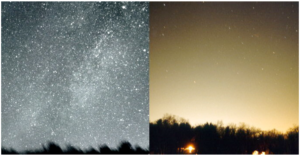 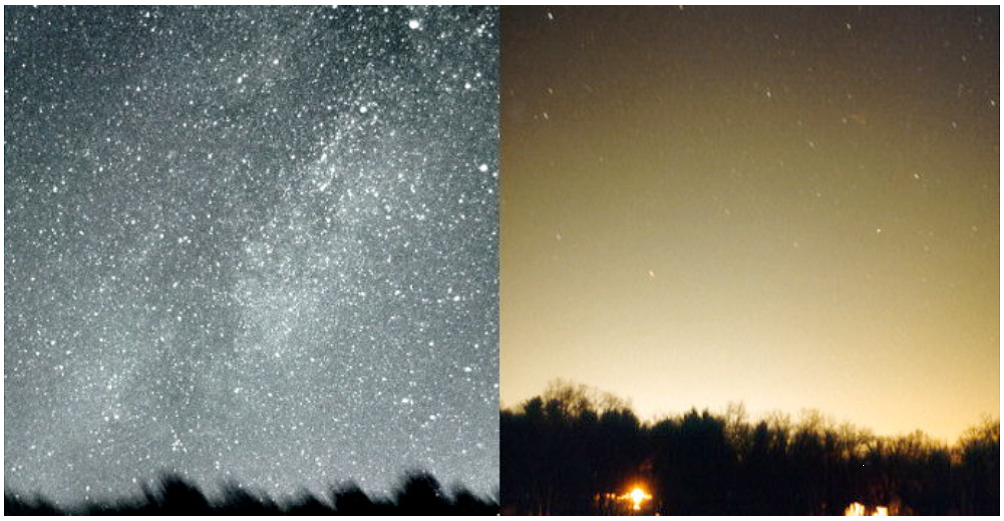 The view on the left is the view most people had from home only 25 – 50 years ago… and the view on the right is what the majority of Americans now see from their backyard. These photos show approximately the same area of the sky; one was taken from a rural area and one was taken from outside a small city (Springfield, MA). Which scene do you find more appealing? Would you be pleased to learn that you as a taxpayer are likely paying money to produce some of the light pollution seen on the right?

What is Light Pollution?

Light pollution is the pollution caused by misplaced artificial light. It is a growing problem that threatens wildlife, humans, natural habitats, our energy use and the heritage of appreciation for our night sky. Leaving lights on in vacant buildings, outdoor lights pointing up to the sky and unshielded outdoor lights all contribute to light pollution or sky glow. There are 4 different components of light pollution:

Urban Sky-glow: Artificial lights that are pointed upwards or misplaced cause the sky to unnaturally “glow” blocking the view of stars.

Light trespass: light that lands in areas where it is not wanted or needed. Example: light from a neighbor’s house is also lighting up your back yard.

Glare: the bright uncomfortable light that comes off of poorly built lamps. This causes a decrease in visibility. 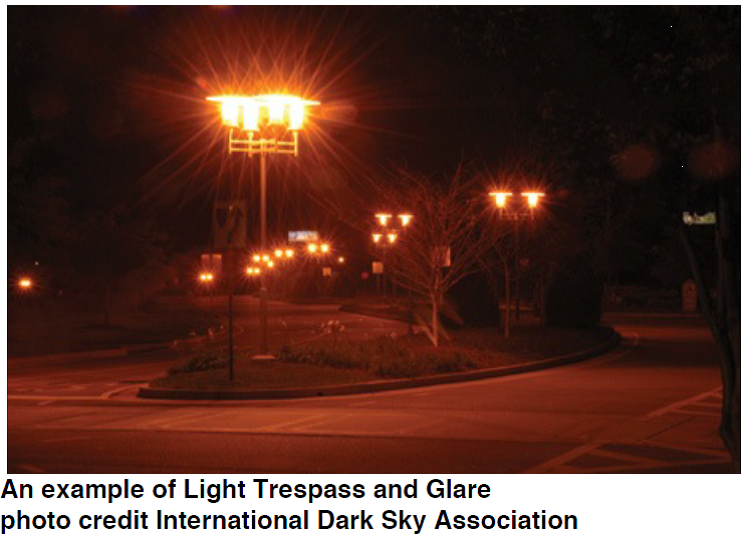 Urban sky glow and clutter obscure our ability to see the stars at night. For example, a person living in the middle of nowhere could see around 2,000 stars while someone who lives in the city would be lucky to see a few stars. Because the stars are blocked out by light pollution, astronomers find it hard to search the cosmos for new galaxies or planets. Astronomers around the world have been publicizing how light pollution negatively impacts astronomical observation. Because of this many believe light pollution only concerns scientists working in the field of astronomy, which could be why the topic is often overlooked when modern environmental threats are discussed. And no one bothers to question why there are fewer and fewer visible stars if they grew up viewing a night sky blocked by light pollution. In fact, 80% of the US population can’t see the Milky Way from their back yard.

Some people are very concerned about the ever increasing levels of light pollution as urban and suburban sprawl continue to grow. Not just astronomers, but also everyday people. Many believe that excessive artificial light at night separates us from our history and from our heritage of appreciating the night sky bringing us closer to nature. Feeling separate from nature can cause people to not care about it or understand it. And research shows light pollution can also harm our habitat and our health.

The aging eye is also susceptible to eyestrain and loss of night vision.

The circadian rhythm is the 24-hour cycle that our bodies run on and what keeps us happy and healthy. Studies show that disruption of this cycle can lead to insomnia, depression, cancer, and cardiovascular disease. Over exposure to artificial light causes your circadian rhythm to be thrown off, possibly leading up to these severe side effects over time.

Melatonin: a hormone called Melatonin is what maintains a natural sleeping rhythm. Artificial light affects this rhythm, decreasing the levels of melatonin in your body. Melatonin is only produced in the darkness. Even a little exposure to artificial light will disturb the melatonin production. If there is a light shining through your window, make sure to block it with something.

Light pollution also negatively affects animals in a bigger way than most would think. The sky glow from towns and cities cause nocturnal wildlife around the world to experience a loss of their night ecosystem.

Mammals: Mammals lose a lot of their internal night systems due to over lit areas. Nocturnal animals such as raccoons, bats, and deer suffer greatly, causing a decrease in population, difficulties with finding food, exposure to predators, and an increase in mortality.

Amphibians: Light pollution causes amphibians to suffer by lowering population, decrease in body weight, and confusion between insects that protect nature rather than harming it. If an ecosystem is anywhere near an urban area with high amounts of light pollution, amphibians will suffer.

Insects: You have probably seen insects fly around your porch light. This is a striking example of how artificial light affects wildlife. Insects such as moths and flies suffer a decrease in population due to light pollution because it is easier for predators to hunt the insects. The decreased insect population impacts all the animals that feed on insects as their main food source.

Birds: If any animal species suffer from light pollution, birds definitely suffer the most. Over 100 million birds in the United States die from collisions with lighted buildings alone. The lighted buildings attract them. That’s not all; some migrating birds don’t reach their destination because the artificial lights interfere with their navigation and can throw them off course.

Reptiles: As you may know, sea turtles travel up on beach shores to bury their eggs in the sand. But what if the beach is near a bright urban area? Baby sea turtles rely on the moon to lead them to the sea. Artificial light can lead them to roads where cars can run them over or to someplace far off until they die from exhaustion. This explains one reason why sea turtles are decreasing in population.

Light Pollution, Energy Use and the Environment

The International Dark-Sky Association estimates we waste $2.2 billion annually in the United States on unnecessary and/or inefficient outdoor lighting, amounting to 22,000 gigawatts of energy producing 14.7 million tons of carbon waste!  So not only does light pollution cost the U.S. $2.2 billion on wasted lights, it is a contributor to global warming. Lights are powered by fossil fuels. This means there’s carbon going into the atmosphere due to poor lighting. And lights that are kept on constantly at night to ensure “safety” not only contribute to global warming, they may not even be that helpful to keep you safe. Studies have shown that security lights have not been proven to decrease crime, and if the light is too bright, you might not even see the person trying to break into your home because of the glare.

Light pollution also enhances air pollution. In 2010, a scientist at the National Oceanic and Atmospheric Administration presented data indicating that human-caused sky-glow “reduces a naturally occurring nitrate radical that helps cleanse the atmosphere of exhaust and ozone.” This study showed city lights can alter the concentration of nitrate radicals, an important atmospheric oxidant. These alterations have potential consequences for pollution levels the following day. So, a night sky full of artificial light is also a filthier sky.

Many homeowners and city planners believe the theory that “more is better” when it comes to lighting our night environment. But the glare of excessive light can actually reduce visibility and well-planned lighting can save money, decrease crime and improve nighttime ambiance. As taxpayers our taxes fund municipal lighting for our streets and government buildings. Let your elected officials know you do not support lighting schemes that waste energy, contribute to global warming and destroy our night sky.

Your support for light pollution control initiatives at the city, state and federal level will also encourage the adoption of such ordinances across the country. To date, about 300 localities in the United States have adopted lighting control laws, primarily motivated by finances, but also by a conservation ethic, and to protect a natural resource (darkness) important to local interests such as tourism or observatories, and of course public safety. 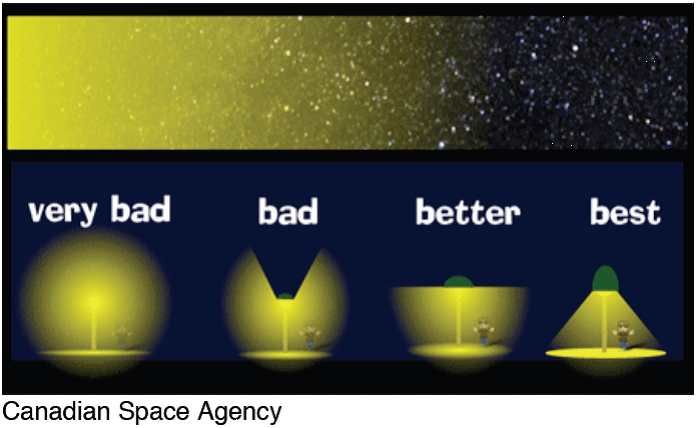 Educating yourself regarding what does and does not constitute dark sky friendly lighting is a great first step toward implementing simple, common sense strategies for outdoor lighting. Set a good example in your own neighborhood! Changing the way people use artificial light is one simple way to solve light pollution. You only need light where you need it: ON THE GROUND. Your neighbors will appreciate your lighting choices if you consider light pollution when selecting fixtures – no more lights shining in their windows.  So here are some suggestions on how to improve exterior home lighting:

To conclude, being dark sky friendly doesn’t mean no light. It means using the light that you need for a particular task in the most efficient manner.

Let there Be Night: Testimony on Behalf of the Dark, Edited by Paul Bogard, Copyright: University of Nevada press 2008 (book)