The holidays are upon us and it is a good time to start new family traditions. Our waste is said to increase by 25% between Thanksgiving and New Years Day. What can we do differently?

When I was teenager, during the early years of the recycling movement, my family received a set of plates and silverware from a relative. This gift included napkin rings. My mum decided to use cloth napkins instead of paper ones. Our first set of cloth napkins were red bandanas. We each had our own unique ring to hold our napkin until it was ready for the wash.

A cloth napkin may be re-used for several days, depending on you, of course, and what you had for dinner. You can create your own napkin rings from any number of things. Most of my extended family still uses cloth napkins. I wonder how many trees we’ve saved? In addition to trees we saved landfill space. According to the EPA almost thirty percent of landfill waste comes from paper products. What about the energy, and chemicals from the production of paper napkins? Water too, despite the theories that washing uses more water, as napkins take up little room and are simply added to the laundry we already do.

More Tips For Reducing Paper Use:

In writing this I discovered my own weak spot, Kleenex tissues! Now my challenge is to buy or make cloth handkerchiefs. In the meantime I will buy responsibly manufactured tissues. Alas, this will be a small hardship?the greener products are not as soft as Kleenex.

Good luck with forming new traditions and keep us posted on your progress and creative solutions. Let’s re-think gift wrapping too! What do you do?

I look forward to this journey together on the Road to Zero Waste! 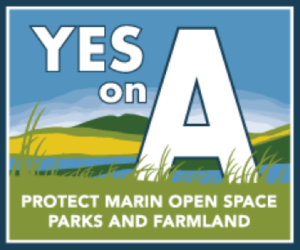 Measure A will protect the open space, parks and farmland that are essential to making Marin County an extraordinary and healthy place to live, work and play. Funding shortfalls and dwindling resources have led to the deterioration of county parks and preserves, and placed at risk unprotected natural places and farmland. Without this essential funding, there will be further reductions in services, access to parks and protection of our natural resources.

Measure A will help protect Marin’s rolling hills, shorelines, wetlands, natural lands, forests and family farms throughout the county.  It has taken decades to build the system of parks, open space and protected farmland we have today. These lands are a living legacy and it’s essential that we renew our investment in them.

Please join Sustainable Fairfax and Fairfax Mayor Pam Hartwell-Herrero in supporting Measure A.  We need to act now. Vote Yes on Measure A.

GUIDELINES FOR PARTICIPATION AT STREETS FOR PEOPLE

Leave the sidewalk clear. Use the street parking spaces for tabling. Please provide your own tables & chairs.

Please use umbrellas for shade, not canopies or tents.

Leave a 14-foot fire lane open in the middle of all streets.

All vehicles must be off of Bolinas Road before 9am.

Bolinas will be closed to automobile traffic between Broadway and Elsie Lane from 9am – 5pm. The event runs from 11am – 4pm.

Have a fun and relaxing day!

We have all heard about the impact our waste has on the earth, on animals, and on people: the island of plastic and other debris trapped by the gyre in the North Pacific Ocean; birds dying, malnourished, their stomachs full of plastic bits; whole communities, often of lower income, falling ill because of improperly disposed industrial waste; how landfill gas contributes significantly to climate change, and so on. It is daunting! What can one person do? Thankfully, Zero Waste is a concept and goal that is gaining traction around the world. It is not just about recycling, but is about changing systems at the government, corporate, and household levels.

The Town of Fairfax has embraced the Zero Waste movement by passing a resolution to achieve ninety-four percent diversion from landfill by 2020. This means that only six percent of all our waste will end up in the landfill; the remaining ninety-four percent will be reduced and reclaimed! Earlier this year the Town of Fairfax and Marin Sanitary Service (MSS) contracted with Sustainable Fairfax to help achieve this zero waste goal. Fairfax is joining communities around the world in creating less waste and we are excited to get going.

Dealing with waste is a complicated matter. How do we dispose of the debris from our lives be it plastic, rotten food, last season’s clothing, a broken toy, dead cell phone, expired medicines, or anything else? Especially when you wonder where does this—paper bag, juice box, old cauliflower, battery—go? Do I put it in the garbage, green waste can, compost bin, or is it hazardous waste?Marin Sanitary Service (MSS) and Sustainable Fairfax can help you answer many of these questions.

Through this monthly blog we invite you to join us on the road to Zero Waste. Our aim is to make it as simple as possible by offering ways to cut down on waste and maybe even save you some money! We will be starting at home first. Further along the way we will address other routes to attain Zero Waste such as advocating for governmental policies that curb waste and helping producers understand their responsibility for packaging through Extended Producer Responsibility (EPR). After all we, the consumers, pay for discarding this packaging, not to mention the cost to the environment. We look forward to many fruitful conversations as we change our habits and discover a more sustainable and expansive awareness of waste.

Look for our Green Tips Blog the first week of every month and see you on the Road to Zero Waste!

It’s time to stock up on reusable bags for your backpacks, purses and car trunks.  The movement to eliminate single-use bags from stores is gaining momentum.

The Marin County bag ordinance in effect as of Jan. 1 comes on the heels of Fairfax’s plastic bag ban approved by nearly 80% of Fairfax voters in 2009. The Fairfax measure, spearheaded by Sustainable Fairfax’s Renee Goddard, was a great success for the town. Plastic bags are are not only disastrous for the environment, but jam up the recycling stream and are rarely recycled.

Goddard emphasized that the Fairfax bag ban was pursued in the spirit of collaboration with Fairfax businesses. “Most of our retailers were already moving away from the use of single-use plastics. I believe they experienced this legislation as a positive, unifying opportunity to celebrate our common desire to do what is right for the environment,” she said.

Although the new law does not apply to incorporated cities and towns like Fairfax, Good Earth Natural Foods has stepped up to the plate by voluntarily participating, and is graciously donating the five-cent fee to Sustainable Fairfax. Although it is far more eco-friendly to bring reusable bags to the store than purchase paper ones (see our Sustainable New Year’s Resolutions), Sustainable Fairfax will put these funds to good use by helping the town achieve its zero-waste goals. Fairfax’s zero-waste ordinance aims for 95 percent diversion by 2020, which is five years ahead of the County.

Hopefully, other cities and businesses in incorporated Marin will recognize the importance of the plastic bag ban and paper bag charge and follow Good Earth’s lead. Paper bags are extremely damaging to the environment, destroying trees and ecosystems, wasting massive amounts of water and energy, and requiring harmful chemicals to produce and recycle them.

The good news is that bag bans are spreading in California and beyond. They have been implemented in ten states within the United States, as well as many developed and developing countries.

California Assemblywoman Julia Brownley intends on continuing her fight to implement a plastic bag ban statewide in 2012. The Assemblywoman’s previous plastic bag ban bill AB 1998 was rejected by the California Senate in 2008, but, given the expansion of plastic bag ordinances across the state including unincorporated Los Angeles and the City of San Jose, the political landscape is now quite different.

The benefits of such legislation are clear. China implemented a plastic bag ban in 2008 and reportedly saved 60,000 tons of plastics, equal to five million tons of coals, and reduced carbon dioxide emissions by over 10 million tons.

With efforts from governments, businesses and citizens, together we can curb the wasteful and needless practice of single-use bags.

Sustainable Fairfax received a great honor at its 12th Anniversary Party in October. LaMonte Bishop presented us with a Certificate of Recognition from State Senator Mark Leno.  The proclamation is a wonderful validation of our efforts in the community.

The text is as follows:

Whereas, Sustainable Fairfax is celebrating its 12th Anniversary; and

Whereas, Sustainable Fairfax has achieved many accomplishments over the past 12 years including: creating the Sustainable Backyard demonstration space, leading a successful plastic bag ban in Fairfax, and advocating for the Community Choice Law which later led to the creation of Marin Clean Energy; and

Whereas, Sustainable Fairfax continued its advocacy through the promotion of rain water harvesting, created a water conservation pilot project, helped slow the expansion of the Redwood landfill, helped stop a desalination plant and worked with other environmentally friendly organizations to Stop the Spray for the Light Brown Apple Moth; and

Whereas, Sustainable Fairfax has been successful in launching a Zero Waste program in Fairfax, establishing “Green Wednesdays” at the Farmers Market in Fairfax, launching the Fairbuck local currency, and creating a Back-to-School safety sign program; and

Whereas, because of their dedication to creating a cleaner, more sustainable environment, Sustainable Fairfax has received an international accreditation as a Citta Slow program participant, becoming only the second city in the U.S.; and has been officially recognized as the 99th Transition Initiative participant in the U.S.;

Now, Therefore, let it be resolved, that on this first day of October 2011, I do hereby extend my sincerest congratulations to Sustainable Fairfax on its 12th Anniversary. Your commitment to ensuring the longevity and the livability of our planet is to be extolled and celebrated by the residents of Fairfax and Marin County. The steadfast efforts of this organization are creating a better future for us all.