You are here: Home / Policy / Climate Justice / Reflections on the Women's March on Washington 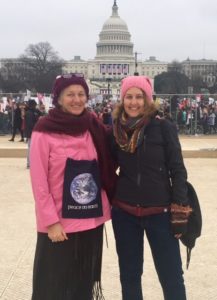 The Women’s March on Washington that took place on January 21, 2017 will go down in the her-story books.

When I learned about the march, I felt a strong urge be part of it and quickly made my travel plans, yet became apprehensive about what to expect: would there be riots, terrorism or violence?

We started the day at a breakfast with the inspiring Rep Barbara Lee (see video). She emphasized the historic nature of the event, the importance of youth involvement, and that we must never return to the archaic policies of the past.

After the breakfast, we made our way to the rally and were astounded by the size of the crowd – we could barely move; it felt like being inside of a mosh pit at a punk rock concert, yet everyone was polite and apologetic for the cramped conditions. We inched through the crowd, shoulder-to-shoulder surrounded by pink pussy hats. I had some pangs of claustrophobia (how would I escape in an emergency?), but let those feelings 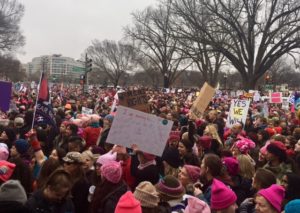 roll away and focused instead on the significance of the moment.

There was an extraordinary and overwhelming sense of peace, power, love, humanity and kindness that permeated the entire event. The signs were creative, provocative and funny, and speakers were powerful- the message was clear: all people must be respected, valued and celebrated, no matter what group they are or are not a part of; and we must fight against regressive policies that undermine the rights of women, minorities, immigrants, LBGTQ community and under-served populations.

I marched to prove to this administration and the world that democracy is alive, and that people still care about liberty and justice for all.  And that includes “climate justice for all” – an important, yet sometimes overlooked part of climate change activism. 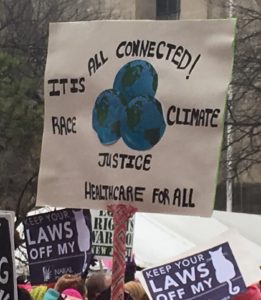 Climate regulation and research is clearly under attack by the new administration. Yet poor communities throughout the US are subject to lethal levels of pollution, or are at risk of sea level rise, such as Marin City right here in Marin County. And there are other countries are in great peril such as drought-ridden Africa.

Sustainable Fairfax is committed to supporting climate activism and climate justice. Stay tuned to learn how you can help resist a dangerous rollback of climate policy. I am confident that the historic marches and activism taking place will keep building. Lets work together towards positive action to support the values we all hold dear.