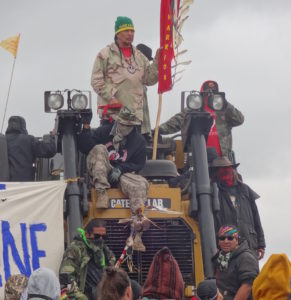 The STANDING ROCK SIOUX are in need of many items to sustain them in their fight against the Dakota Access Pipeline. Local Fairfax resident Peter Anderson has recently returned from a 3-week trip to the reservation to support them, and will be returning soon to bring them additional supplies.

SUSTAINABLE FAIRFAX IS HELPING PETER COLLECT ITEMS that are on on their supply list. In terms of clothing, they ONLY want very warm, good condition coats, sweaters, and other winter wear and insulated Carhartt type coveralls, overalls and coats. They also need heavy duty tarps, lighters, sleeping bags (only 0 degree F or lower), fur blankets, battery packs / solar chargers for charging phones, tents (that can stand up in high winds, snow, subzero temps), and small wood stoves. For a full list of supplies requested, see http://sacredstonecamp.org/supply-list/. (Note: firewood is being handled locally).

Please bring your items to Sustainable Fairfax, 6 School St, Suite 150 on Wednesday, Nov 9th between 11am-3pm, or you can deliver directly to Peter Anderson’s house at 19 Claus Drive in Fairfax (behind Museum of Bicycling)- leaving items on the porch is fine. 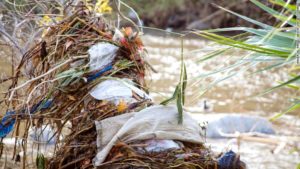 We often hear about how Americans buy too many products we quickly dispose of or don’t really need. However, many overlook the wastefulness of the packaging and transport of the products we buy. The amount of single-use plastic bags we consume is no small issue; in fact, the United States goes through over 100 billion plastic bags annually.

Plastic bags put an enormous burden on our environment and our wildlife. We use 12 million barrels of oil every year to produce the number of bags we use in this country. Plastic bags are responsible for the death of over 100,000 sea creatures when these animals mistake them as food. On top of that, plastic doesn’t biodegrade, it only photodegrades, meaning it will break up into extremely small pieces resembling dust but it will still be harmful to the environment.

With this ominous and foreboding status of plastic bag use today, it seems like reducing or stopping their production and use is unsurmountable. When looking at this issue as a whole, it can seem overwhelming and hopeless. We must focus on how to change our plastic bag use at the individual, local, state and eventually national level. With the upcoming election this November 8th, I urge you to take a stand against the use of plastic bags and take a stand for our earth.

Two years ago in 2014, California passed the first statewide single-use plastic bag ban in the nation, following the lead of cities and towns all over the state (Sustainable Fairfax initiated one of the first successful plastic bag bans in the country here in Fairfax!). Plastic bag companies from all over the country were distressed that they would lose their biggest consumer of plastic bags. So they hastily challenged this law and placed Proposition 67 and 65 on the November 8th ballot in an effort to complicate, distract, and repeal the existing law.

Proposition 67 puts the California statewide single-use plastic bag ban before the voters, as the result of a referendum on the law sought by the American Progressive Bag Alliance, a coalition of plastic manufacturers. Proposition 67, if passed, would essentially eliminate the use of single-use plastic bags, as well as charge a 10¢ fee for any reusable or paper bag. Prop 67 would give the money collected from the 10¢ bag fee to the grocer. This way, the grocer could use the 10¢ to help abide with the new law requiring them to use more expensive reusable or paper bags.

According to Jessica Connolly, the Recycling Programs Coordinator for Marin Sanitary Service, reusable plastic bags are up to “five times more expensive” to make (a reusable plastic bag is defined as being able to carry 25 pounds across a football field 125 times!)  For this reason, plastic bag companies are strongly opposed to the plastic bag ban, and spent $2.9M to oppose Proposition 67.

Proposition 65 is an initiative that was also placed on the ballot by the American Progressive Bag Alliance. If the plastic bag ban passes, this law would demand that the money collected from the 10¢ bag fee be directed into a California State environmental fund. What could be wrong with that? Not so fast. Many believe this poorly written law was put on the ballot by the plastic industry to confuse voters. Since the grocers would be required to give the money to the State, the plastic bag ban opponents could challenge the law by claiming that the bag fee is actually a tax. Tax measures need a 2/3 majority vote to pass, rather than the 50 percent simple majority needed for initiatives. If Prop 65 gets more votes than Prop 67, but doesn’t get 2/3 of the vote, it likely will be challenged and repealed in court, thereby eliminating any plastic bag ban.

For plastic bag ban proponents, the hope is that people will become accustomed to bringing their own reusable bags. According to Mark Squire, owner of Good Earth Natural Foods, they have never given out plastic bags at checkout and initiated a fee for paper bags years ago. He believes that the bag fee serves as an effective reminder for his environmentally conscious customers to bring their own bag when they can. Squire has seen a steady increase in the use of reusable bags, which is currently at about half and half.

In short, to ensure that single-use plastic bags are banned from our state, it is important to vote YES on Proposition 67. And vote NO on Proposition 65.  I believe the plastic industry is misleading the public about what is best for the grocers, the environment, and the consumers and are only looking out for themselves. Help protect our earth, you have the power to make a difference!