Join us for the next film, Time to Choose, as part of our Film & Speaker series:

Time to Choose features world-renowned entrepreneurs, innovators, and thought leaders, as well as regular people from around the world who talk about winning fights to save their communities from the effects of fossil fuels and industrial agriculture.

Local environmental organizations will be speaking and tabling at this event and will choose the most impactful actions you can take to help the cause.

This event is sponsored by Sustainable Fairfax and the Environmental Forum of Marin.

Join Sustainable Fairfax and Environmental Forum of Marin for the screening of “Time to Choose” on Friday, September 15- we are thrilled that the Executive Producer Jeff Horowitz will be joining us and will take questions after the screening.

The weather events over the last several weeks are serious reminders that climate change is happening now. This film night will provide the opportunity to have an important conversation, and create our own plans of action to reduce our impact on the planet.

Time to Choose features world-renowned entrepreneurs, innovators, and thought leaders, as well as regular people from around the world who talk about winning fights to save their communities from the effects of fossil fuels and industrial agriculture.

Local environmental organizations will be speaking and tabling at this event and will choose the most impactful actions you can take to help the cause.

This event is sponsored by Sustainable Fairfax and the Environmental Forum of Marin.

Carbon sequestration is a foreign concept to many, including myself. That being said, it is a very important part of sustainability and it is a process that can help reverse the harmful effects of global warming if adopted across the planet. Global warming is caused by the increase of greenhouse gases in the atmosphere. Carbon dioxide, a common greenhouse gas, is released into the atmosphere when we drive our cars, use electricity from nonrenewable sources, heat our homes or cut down our forests.

The increase of greenhouse gases in the atmosphere causes detrimental problems like ocean acidification, an increase in droughts and wildfires, stronger hurricanes, and sea-level rise. Problems such as these are the reason we need solutions that will take carbon dioxide out of the atmosphere and return it into the earth. We need innovations that will connect the environment, economy, and politics together. There is one thing for sure: something has to change.

I started by looking at the Marin Carbon Project.  The Marin Carbon Project (“MCP”) is an organization that works to “enhance carbon sequestration” in different types of soils. In a general sense, carbon sequestration is a process in which carbon dioxide is taken from the atmosphere and is stored in other biogeochemical cycles. The MCP wants the farmers of Marin to be pioneers in carbon sequestration techniques so we can start reversing climate change. They currently have eight carbon farms in Marin but in the next three years, they plan to have more than twenty.

Their carbon sequestration methods are not easy to understand, but according to MCP, “by increasing the amount of photosynthetically captured carbon held, or sequestered, in long-term carbon pools on the farm or ranch, including soil organic matter, perennial plant roots and standing woody biomass, Carbon Farming results in a direct reduction in the amount of carbon dioxide in the atmosphere.” Their techniques are on the cutting edge of carbon sequestration.

I interviewed John Wick, who co-founded the MCP. Wick has worked in the area of carbon sequestration for over ten years and is a rancher in West Marin. He worked with scientists at UC Berkeley to quantify the phenomenon of carbon sequestration as he needed to determine what it would take to both cool the planet while feeding and clothing more than seven billion people, a nearly impossible task.

Wick observed success in shifting the vegetation species composition from invasive annual grasses to deeper-rooted native perennials, and thought that it allowed the soil to take more carbon. He needed a scientific protocol for measurement. UC Berkeley scientists found that a topical application of compost changed the way the soil behaved, as plants turned atmospheric carbon into new carbohydrates through the natural process of photosynthesis, taking in more and more carbon as time went on. Wick also stressed the importance of the grass, and talked about how grazing by both wild and domesticated animals is a critical aspect of  soil carbon sequestration.

At the end of our interview he left me with a few facts, and one really stood out to me. Currently, the Intergovernmental Panel on Climate Change agree that emission reduction will no longer help slow climate change, so we must develop a strategy of ongoing atmospheric carbon removal that is sustainable. This is exactly what the Marin Carbon Project has achieved! You can learn more about MCP at http://www.marincarbonproject.org.

Another source of inspiration on climate change is the recent book Drawdown by Paul Hawken. Drawdown is a collection of one hundred most effective ways we can combat global warming. The word “drawdown,” in particular, pertains to reducing atmospheric carbon in various ways including carbon sequestration.  In his book, he talks about the importance of composting. Composting prevents food from going into the landfills where it will decompose slowly and produce methane, a greenhouse gas more potent than carbon dioxide. Composting also returns carbon back into the soil: this is crucial.  According to Hawken, composting could reduce 2.28 gigatons of carbon dioxide by 2050.

I find composting both an eco-friendly and self-satisfactory process. We bring a lot of our food scraps to our chickens, peacocks, and other fowl. It’s great to see how we both return the carbon back into the earth and feed the birds with our waste. It’s important that we all play our part in reducing atmospheric carbon.

Coastal wetlands are a huge source for sequestering carbon and destroying them would not only destroy habitat for millions of organisms, but it would also deepen the effects of global warming. According to Hawken, 1.2-2.4% of the sequestration of carbon in the world occur in these vital ecosystems. The organisms and flora of the coastal wetlands work together to create a “carbon sink” and take carbon away from the atmosphere.

Moreover, it is not only coastal wetlands that have a huge impact on carbon sequestration but it is also different ecosystems around the world like estuaries and rainforests that are so vital to carbon sequestration. I implore everyone to make sure we don’t harm these beautiful and potentially earth saving ecosystems.  To learn more about Drawdown visit http://www.drawdown.org.

My time learning about carbon sequestration from the MCP, Wick and Hawken has shown me that we can reverse climate change and global warming. Global warming isn’t just a thing that should be adapted to, it should be a thing that should be solved. Wick cleverly used a Warren Buffett quote and applied it to carbon: Buffett’s two most important rules in gaining wealth are to “never lose money” and to create compounding interest situations. Wick claims that we need to do the same thing with carbon. If we never lose carbon from the soil, we can create a compounding interest conditions that increase through use. We need to return carbon to the soil. Wick left me with a hopeful thought: he said, the one thing that everyone can do to help carbon sequestration is to compost everything that comes from living sources.

We need to work hard to find creative solutions like carbon sequestration and fund climate research and projects that scale-up the solutions. Empowering the public to do their part in composting and providing farmers with the knowledge and the tools to implement carbon sequestration practices are essential to keep “drawingdown” atmospheric carbon. Action should also be taken at the political level, such as advocating for tax incentives for carbon negative farms. Reversing global warming will take a variety of strategies, as there is no one solution. Marin is a unique and beautiful place and if we want the future communities of Marin to enjoy it as we do, we must act!

Special thanks to John Wick for a fascinating and informative interview 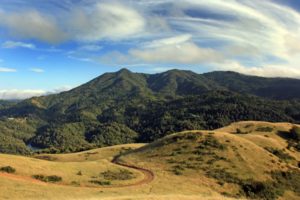 Join the Marin-wide mobilization that will synchronize with hundreds of similar actions and marches around the country on April 29th in support of the giant People’s Climate Mobilization and march that day in Washington DC!

Stand up for a future that our great-grandchildren can live and thrive in. Sustainable Fairfax is sponsoring this event along with 350Marin, Mill Valley CAN, West Marin Standing Together, Sierra Club of Marin, United Marin Rising, other groups and neighbors across the county.

The event, planned with a broad coalition of local citizen groups, will have three parts:

1) 11:00am: Three marches will gather at different locations and start marching no later than 11:15 toward the San Anselmo Hub.

The three starting locations will be

Join us!  Demand that our elected representatives take action on one of the most crucial issues of our time: climate change! 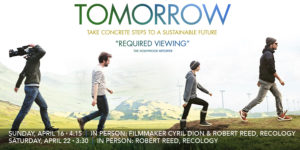 Sustainable Fairfax is thrilled to be the Community Partner for the showing of “Tomorrow” at the Smith Rafael Film Center on Saturday, April 22nd at 3:30pm followed by a discussion with the filmmaker.

Mahatma Gandhi said, “You must be the change you want to see in the world,” and in this film (which won the French César for Best Documentary), co-filmmakers Cyril Dion and actor-director Mélanie Laurent travel ten countries encountering individuals and communities who have taken environmental sustainability into their own hands. From the urban farms of Detroit to an English town that encourages local spending by minting its own David Bowie currency, and from a completely sustainable village in southern India to the progressive schools of Finland, the filmmakers introduce us to people making inspiring differences in the fields of food, energy, finance, democracy and education. In English and in French with English subtitles. 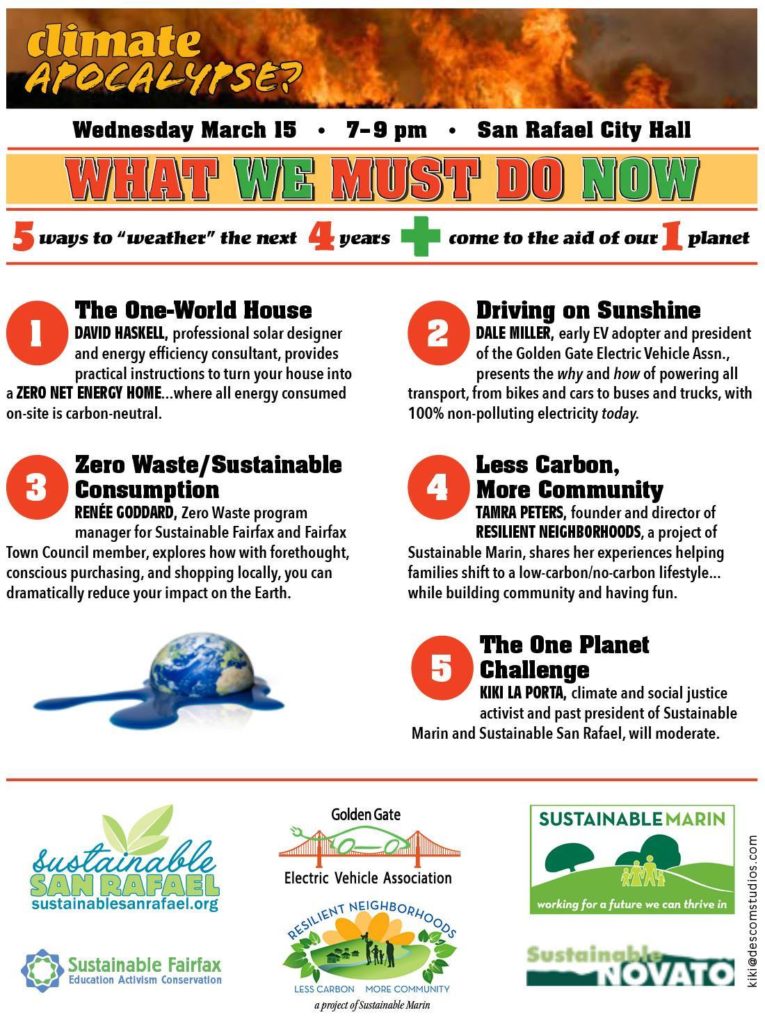